The Importance of Plants 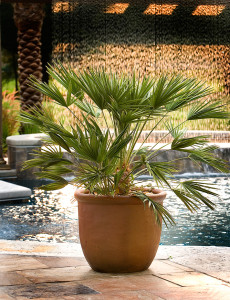 People have a positive response to plants and planted environments and they produce a positive economic return in the work place. 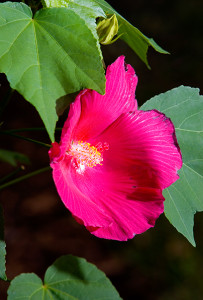 In 1984, Harvard biologist Dr. Ed Wilson named our natural human affinity for nature, biophilia. Stephen R. Kellert, an advisor on prominent green building projects and professor of social ecology at the Yale School of Forestry and Environmental studies has spent much of his career thinking and writing about biophilia. In a recent interview discussing his latest book, Biophilic Design: The Theory, Science, and Practice of Bringing Buildings to Life, he discussed a study underway at the eastern headquarters for Bank of America at Bryant Park [in mid-town Manhattan]. “My colleague is currently working on the study along with a furniture manufacturer, Herman Miller to review the degree to which direct exposure to natural elements might impact employees in the office and factory. They were able to find significant productivity gains, less absenteeism, less health problems, a better sense of well-being as reported by the individuals that participated. And ultimately all of this translates to the bottom line.”

When plants transpire water vapor from their leaves, they pull air down around their roots. This supplies their root microbes with oxygen. The root microbes also convert other substances in the air, such as toxic chemicals, into a source of food and energy. Microbes, such as bacteria, can rapidly adapt to a chemical contaminant by producing new colonies that are resistant to the chemical. As a result, they become more effective at converting toxic chemicals into food the longer they are exposed to the chemicals. It is also important to remember that the efficiency of plants as a filtering device increases as the concentration of chemicals in the air increases. For example, the removal rate of a chemical is much higher at 7 parts per million (ppm) exposure than at 2 ppm. (per study listed above.)

Beginning with the early data published by Dr. Bill Wolverton while and following his work with the National Aeronautics and Space Administration (NASA) and including more recent ‘real world’ research lead by Dr. Ron Wood, Professor Margaret Burchett and others in Australia, we now know that several common species of interior landscape plants have the ability to remove compounds such as benzene and hexane in the range of 50% to 75% of the total volatile organic compounds. Internationally respected in the field of air quality reesarch, Dr. Margaret Burchett goes so far as to declare the following. “…to ensure sustainability of the urban environment, satisfying the ‘triple bottom line’ of environmental, social and economic considerations, it is expected that indoor plants will become standard technology–a vital building installation element, for improving indoor air quality.” 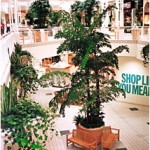 Biomimicry is the science and art of emulating nature’s best biological ideas to solve human problems. Interior plants within a green design are a perfect example. Live indoor plantscapes demonstrate nature’s hearty resolve and process of cleaning surrounding air while exchanging it for fresh oxygen. For those who seek clean, natural solutions to environmental issues, live interior landscaping can serve as a living illustration, affirming belief in nature’s intelligence.

Green walls, also known as vertical planting systems, vertical gardens, plant walls or vegetated walls have been successfully Implemented around the world over the past 15 years. In 2004, a four-story plant “biowall” was installed at the University of Guelph-Humber Building in Ontario, Canada. With plant life visible from nearly every floor, the wall acts as an indoor air purifier, pulling air through the wall and into the mechanical air ducts. According to the University, the biowall could supply all of the building’s fresh air intake needs.  Irrigated by a vertical hydroponic system, it naturally cools the building in the summer and humidifies in the winter. Today, architects and design teams are specifying brilliant walls of live greenery with functions ranging from fully scrubbing the air to simply humanizing windowless and  ‘nature deficient’ indoor spaces.

Cooling Interiors via Shading (allowing for natural views). Expressed as a decimal between 0 and 1, shading coefficient represents the percentage of solar heat gain that is transmitted through a shading system into a building, compared to that of a single pane of clear 1/8-inch glass. The lower the shading coefficient, the lower the heat gain through the material, and thus the better the solar control performance. While retractable screens have become an effective tool, the advantage to using the shading from internal plants is that when the shading is most required, the inhabitants don’t sacrifice exposure to natural settings (plants).  While the theory of shading may sound simplistic an architect in Germany has created a system referred to as ‘Green Solar Architecture’ in which the interior climate is actually regulated with plants. The species selected include those which shed leaves over the winter, allowing for more solar energy to enter the building and flourish in the summer providing shade.

In tandem with the call for indoor environments rich with natural light and views of nature, interior plant installations can create spaces of significant shade at all times of the day and throughout the year. Plants possess a natural ability to draw their system towards a light source, which can act as an indoor awning while producing a beautiful fluid effect across the space.

Whether indoor spaces include trees of 25 feet or simply small plants near a window, the need for alternative means of shading can be eliminated while maintaining the valuable natural view. This multi-purpose method of shading becomes much more cost-effective than alternative engineered products. 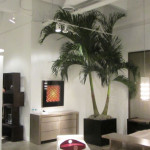 Occupant concentration and productivity are negatively effected when elevated levels of carbon dioxide are present indoors. Many busy humans within one well-sealed building can produce drowsy employees. However, during photosynthesis plants naturally extract carbon dioxide and exchange it with fresh oxygen. Based on modest estimates of existing and emerging data, it has been calculated that a minimum of 300g (10 oz) of carbon dioxide can be eliminated from the enclosed environment for every square meter of leaf surface in the area per year. Over a years time this amounts to a removal of 6 cubic feet of Co2 gas. In areas where there exists an abundance of natural light, this process is amplified, affording even more absorption.  A review of the plant’s carbon assimilation from planting to disposal is needed to provide a comprehensiv analysis of it’s carbon footprint.

We are Less Stressed and More Productive Around Plants

Respected research done by Dr. Roger S. Ulrich of Texas A&M University, Helen Russell, Surrey University, England as well as those conducted by Dr. Virginia Lohr of Washington State University verify that plants significantly lower workplace stress and enhance worker productivity. In Dr. Lohr’s study, common interior plants were used in a computer laboratory with 27 computer workstations. A computer program to test productivity and induce stress was specifically designed for these experiments. Participants working in an environment with plants present were 12 percent more productive and less stressed than those who worked in an environment without plants.

We are Willing to Pay More in Retail Areas with Trees 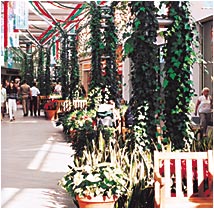 Retailers have long understood the importance of store environments in enhancing the shopping experience. Marketers have studied the situational influences of product packaging and store layout on the behavior of shoppers (Engel et al. 1990). While business people are keenly interested in the presentation of their product and store they often overlook “macro” level settings – the district that surrounds their shop or office. Mattila and Wirtz (2002) extend the notion of Gestalt to consumers’ perceptions of retail environments and demonstrated that consumers perceive the service-landscape holistically.

Interior plants and landscapes create situations more favorable for retail activity. When we shop in retail areas with “tree” versus “non-tree” environments we visit more frequently, stay longer, rate the quality of the products 30% higher and are willing to pay about 12% more for goods.

Flowers and Plants Inspire our Creativity

“We know the importance of learning, for example, how natural surroundings affect drivers, school children and hospital patients,” said Ulrich, who has conducted extensive research on the effects of environments on psychological well-being, stress and health. “To businesses, it should be equally as important to understand what features can improve performance at work and make employees more productive.”

In an eight-month study, the Texas A&M University research team explored the link between flowers and plants and workplace productivity. Participants performed creative problem solving tasks in a variety of common office environments or conditions. The conditions included a workplace with flowers and plants, a setting with sculpture and an environment with no decorative embellishments.

During the study, both women and men demonstrated more innovative thinking, generating more ideas and original solutions to problems in the office environment that included flowers and plants. In these surroundings, men who participated in the study generated 15% more ideas. And while males generated a greater abundance of ideas, females generated more creative, flexible solutions to problems when flowers and plants were present.

Plants Contribute are Important to a Healthy Lifestyle 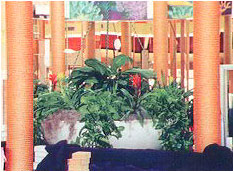 Real life office studies have proven the direct relationship between clinical health complaints and plant installations. Sick Building Syndrome is a serious and expensive issue, and the degree to which interior plants can positively affect employees’ health is an important issue in today’s workplace.

Professor Tove Fjeld of the Agricultural University in Oslo, Norway carried out several conclusive studies regarding health claims relating to Sick Building Syndrome among workers. This crossover study was conducted among 51 offices. During one period, plants were included in the offices. And during another, plants were not included. All participants worked in identical, single offices, with a floor area of ten square meters and a window covering most of the outer wall. When plants were included, the participants were exposed to 13 commonly used foliage plants placed in three containers on a window bench, and a terracotta container with plants in the back corner of the office. When reviewing 12 of the common symptoms most often related to poor indoor air quality and ‘sick building syndrome,’ there was a 23% lower complaint rate during the period when the participants had plants in their offices. If the symptoms were clustered, a significant reduction was obtained in neuro-psychological symptoms and in mucous membrane symptoms, while skin symptoms seemed to be unaffected by the plant intervention (Fjeld et al. 1998).